The Road Most Traveled: The Busiest Airports in the World and How to Get There

It’s the most wonderful time of the year – and the busiest for air travel. With the holiday season right around the corner, people everywhere are planning their winter getaways. Whether it’s to accommodate those jetting off to somewhere tropical or help reunite far-away family members, airports will undoubtedly become far more crowded this month.

As moving to metropolitan areas is also a growing trend, public transportation in cities across the country and the world is growing more congested as well. With most major airports positioned just outside major cities, what does this mean for airport transportation? Getting to and from the airport without a cab might seem daunting – but we’re here to help. Here is a comprehensive guide to the world’s busiest airports, and the transportation methods that will get you there as seamlessly as possible.

Hartsfield-Jackson Atlanta International Airport (ATL):
Notoriously the busiest airport in the US, Hartsfield-Jackson Atlanta International Airport offers nonstop service to over 150 domestic and 70 international destinations in addition to being a point of connection for countless flight paths. How to get there: Luckily, Atlanta’s got an underground subway system dedicated to airport travel. MARTA shuttles passengers from the city of Atlanta directly to the domestic terminal of the ATL airport. Headed to an international flight instead? From the MARTA drop-off point, there is a free shuttle service to the international terminal, so all of your destination bases are covered.

Atlanta’s got an underground subway system dedicated to airport travel. MARTA shuttles passengers from the city of Atlanta directly to the domestic terminal of the ATL airport.

Beijing Capital International Airport (PEK):
The main international airport serving Beijing and its surrounding areas, this airport lies about 20 miles outside of Beijing’s city center. How to get there: The airport shuttle takes passengers directly from the Capital Airport gates to Fangzhuang, Beijing South Railway Station, Beijing Railway Station, Gongzhufen, Zhongguancun, Shangdi and Olympic Village, Beijing West Railway Station, Huilongguan, Tongzhou, Wangfujing and Jinbao Street, Shijingshan, Yanjiao, and Changping. If your destination is outside of those drop off points, no worries – there are also interprovincial shuttle busses that can bring passengers to further reaching cities such as Tianjin, Qinhuangdao, Langfang, Baoding, Tangshan, Cangzhou, and Chifeng. There is also an Airport Express railway that connects travelers from the Capital Airport to various subway stations throughout the area. 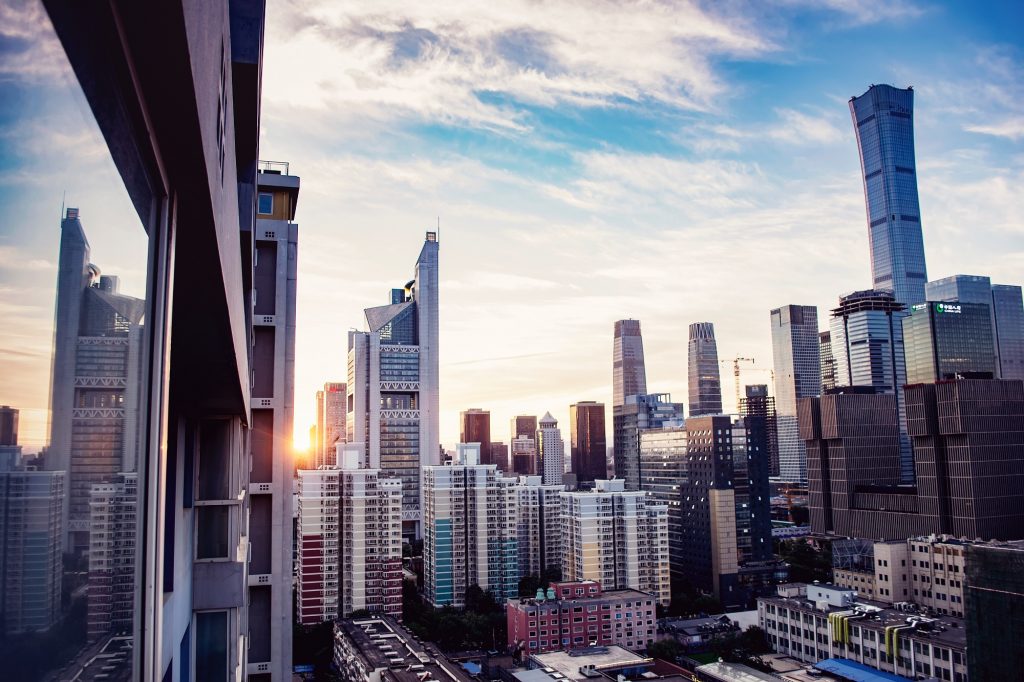 Dubai International Airport (DXB):
The third busiest general traffic airport in the world and the busiest for international traffic, Dubai International Airport is known for having the highest number of passengers per flight. How to get there: a shuttle bus transporting passengers to the nearby Ibn Battuta Metro Station runs to and from DXB terminals 1 and 3 every ten minutes from 5:50 am to midnight. With only two lines, the system is simple to use, even for those using this airport for the first time, and metro tickets are available for purchase in the airport itself. Most drop-off points connect to busses and taxi stations for those traveling further, although most tourist destinations are close to these metro stopping points.

Los Angeles International Airport (LAX):
Adjacent to a city infamous for its traffic, public transport to and from LAX is even more of a necessity. How to get there: Currently, there is an above-ground bus route in place specifically for transportation between LA and LAX. The FlyAway Shuttle stops at various locations throughout the city of Los Angeles, and drops jet-setters off at each of the airport’s different terminals. A below-ground option is also available in the form of the metro rail. The metro makes a few more stops along the way, but some lines are free, making this mode of transport definitely worth your consideration. Additionally, LAX is in the process of making things even easier for commuters headed to and from the big city. The airport will soon unveil the Automated People Mover (APM), an elevated 2.25 mile-long train system that will shuttle passengers from gates to various pick up and drop off locations including the rental car facility and the regional rail system.

Tokyo Haneda Airport (HND):
Commonly known as Haneda Airport, HND is one of two primary airports serving the greater Tokyo area. It is also the home base for two of Japan’s domestic airlines, Japan Airlines and All Nippon Airways. How to get there: passengers can travel to and from Haneda Airport using either the trains and monorails system or the bus. If the train is your transport of choice, the Haneda Airport International Passenger Terminal connects directly to the underground terminal train station, positioned on the Keikyu Line. This terminal also connects to the terminal station of the Tokyo Monorail line, both of which connect to the greater city-wide area. The bus connects Haneda Airport to locations in Tokyo, Kanagawa, Chiba, Saitima, and other places within the Kanto region.

The runway at Tokyo Haneda at night. Photo by Justin Lim.

Hong Kong International Airport (HKG):
This commercial travel hub, informally known as the Chek Lap Kok Airport due to its location on the island of the same name, serves as the world’s busiest cargo gateway in addition to being one of the busiest airports for passengers. With 74,535,000 passengers handled over the past 12 months, the business of HKG is growing by 3.4 percent year over year. How to get there: The quickest way to and from HKG is via the Airport Express, which transports passengers between the airport and Hong Kong’s city center in about 24 minutes. Trains run every 10-12 minutes between the hours of 6:00 am and 12:45 am. Hong Kong’s public busses also stop at multiple locations around HKG airport, and also provide an inexpensive and efficient way to get to and from the airport and the city. 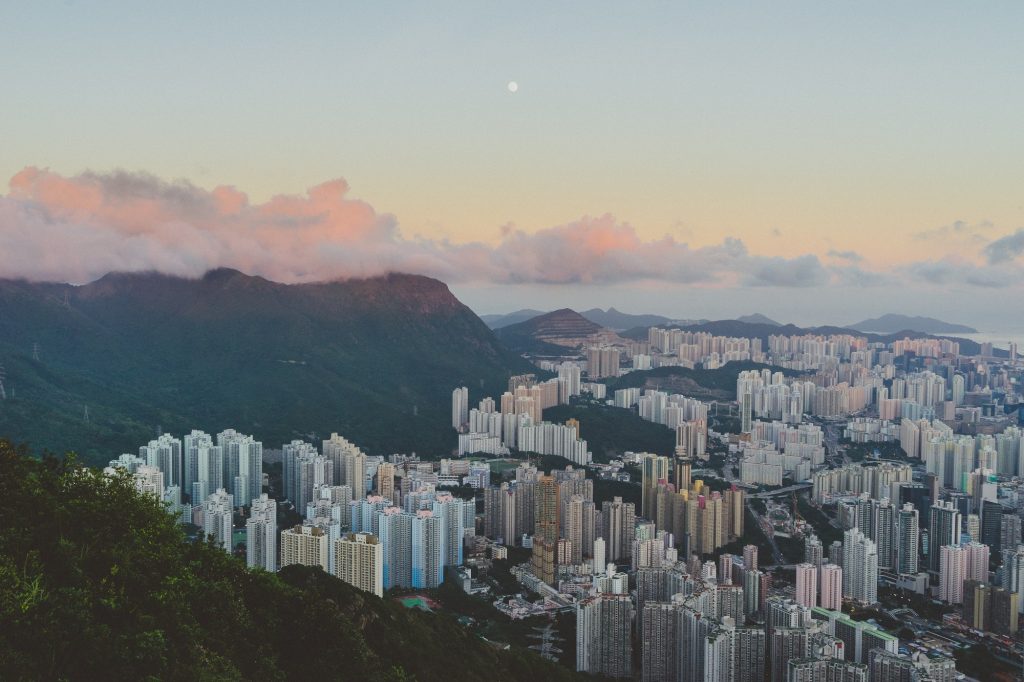 A bird’s eye view of the Hong Kong skyline by photographer Bady Qb.

Sydney Airport (SYD):
A record 43.3 million passengers, 14.9 million of which were international travelers, utilized Sydney Airport’s three terminals in 2017. Located just 5 miles outside of Sydney’s city center, SYD is the busiest airport in all of Australia. How to get there: A train system called Airport Link can shuttle passengers between the airport and the city in a mere 13 minutes. Trains run every 10 minutes or so, and will bring travelers right to the North end of the International Terminal. City busses also make stops at SYD Terminals 1 and 3. Both the bus and the train require an Opal card to board, which can be purchased at any station, Relay or WH Smith of your choosing. 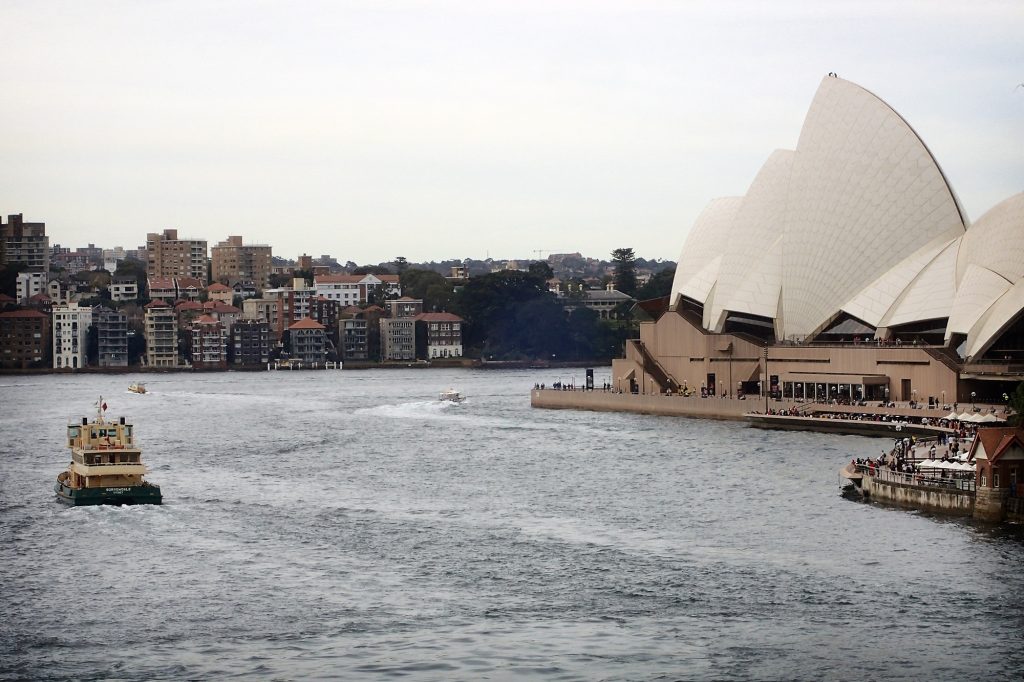 Singapore Changi Airport (SIN):
The primary civilian airport for Singapore, Changi Airport is also one of the largest transportation hubs in all of Southeast Asia. More than 100 airlines and 62.2 million passengers have flown in and out of Changi airport in the past 12 months. How to get there: The city’s public train is within walking distance of Terminals 2 and 3 of Changi Airport. To get to the city from Changi, passengers should transfer to the westbound train at Tanah Merah train station. Trains run between 5:30 am and 11:00 pm (starting at 6:00 am on Sundays and public holidays). Headed to Changi from Singapore? The eastbound train at Tanah Merah station will take you right back to Terminals 2 and 3. If you’d prefer to take the bus, Changi also connects to the city’s bus system. Bus stops lie in the basement bays of Terminals 1, 2 and 3, and nearby to Terminal 4. EZ-link cards used to ride the bus are available for purchase at any convenience store, or within the airport itself. 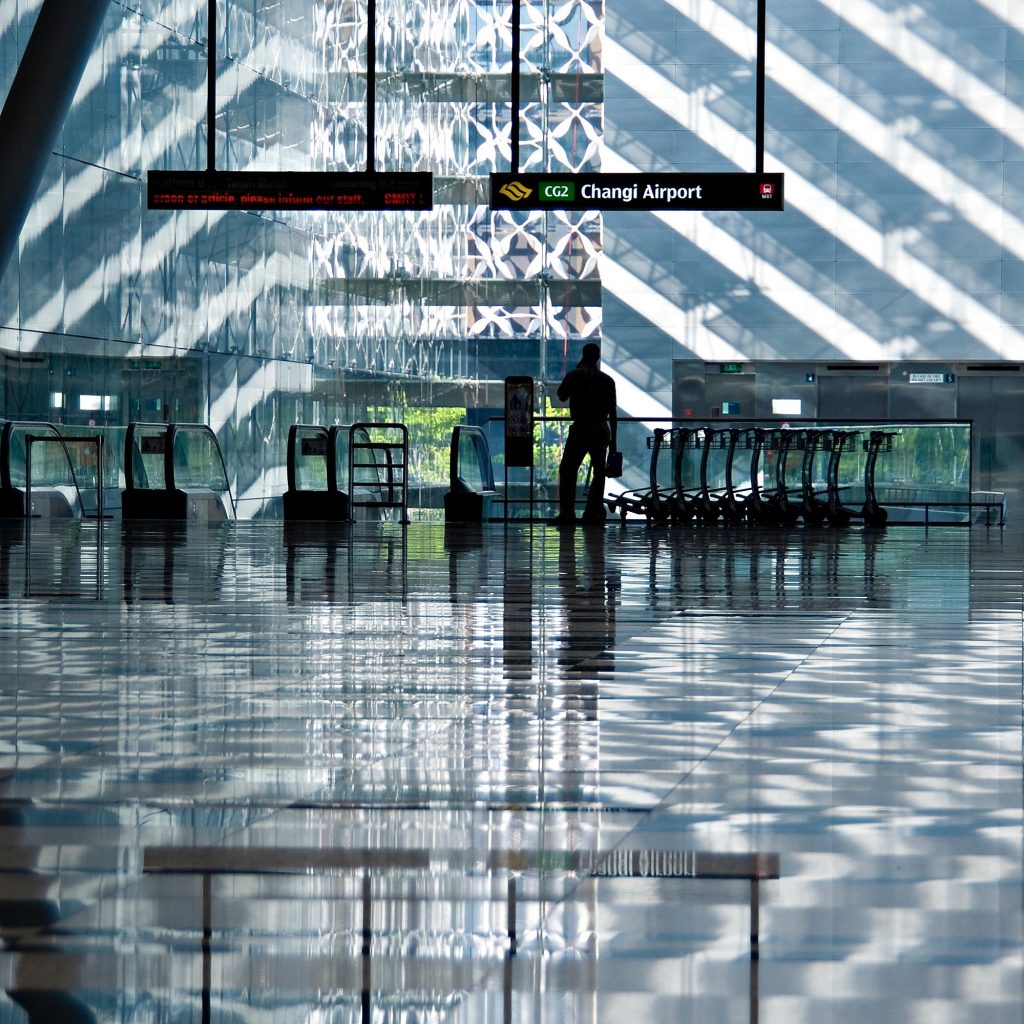 The interior of Changi Airport taken by photographer Grahame Jenkins.

More than 100 airlines and 62.2 million passengers have flown in and out of Changi airport in the past 12 months.

John F. Kennedy International Airport (JFK):
John F. Kennedy International Airport, famously renamed after the 35th President of the United States, is located in Queens, about 16 miles southeast of the heart of Manhattan. Having handled over 59 million passengers in 2017 alone, JFK stands as the busiest hub within New York’s already busy airport system, and the 22nd busiest airport in the world. How to get there: The AirTrain, a rail that connects all of JFK’s terminals, also connects passengers to the Jamaica and Howard Beach train stations. From each of these stations, travelers can either take the Long Island Rail Road to Manhattan’s Penn Station, or can opt for the New York Subway system. From the Jamaica station, Subway-riders can take the E, J, or Z lines, while the Howard Beach station provides a connection to the A line. 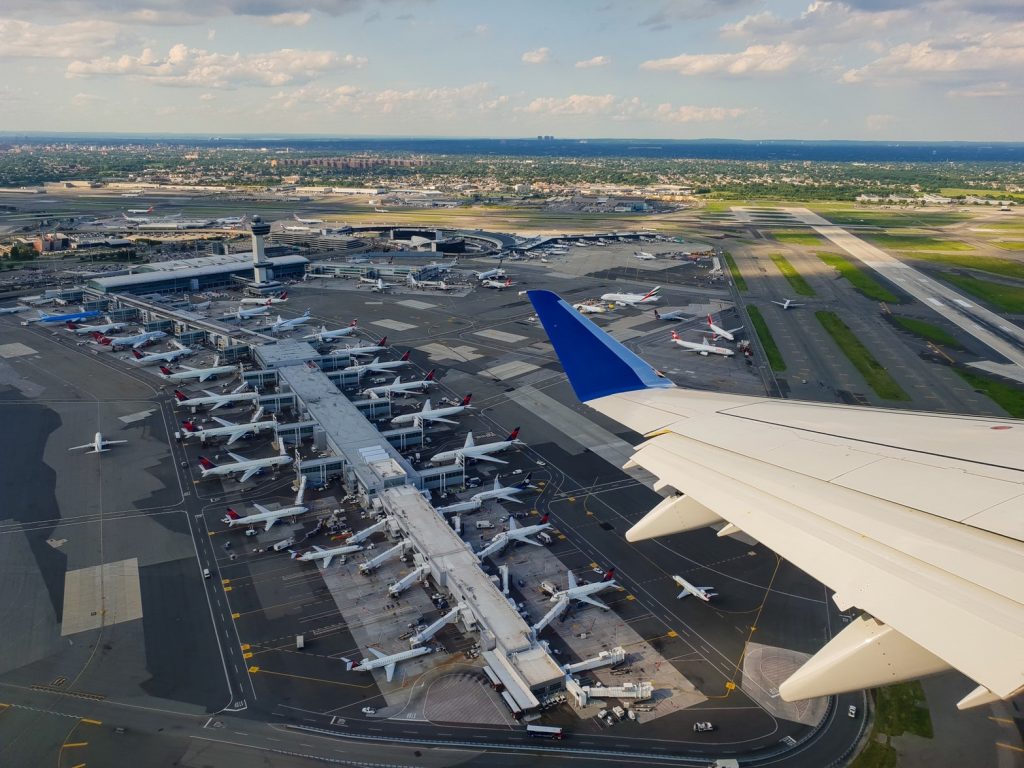 Hopefully this list makes your winter getaway a little smoother this holiday season. From all of us at Blueprint – happy travels!

Tags: Airports, Holidays, Travel
MORE FROM A VIEW FROM THE TOP:

The Intersection of Brand and Real Estate in the Experience Economy

Winning Clients’ Hearts and Minds: A Conversation with Mike Lafitte

Real Estate Should Boost Productivity, Not Thwart It