In the scheme of things, the 400 million square feet of commercial property in the Republic of India may not seem like enough for a growing global economic force with a population of over 1.2 billion people.

Considering India is adding nearly 30 million square feet of office space each year—with an additional 100 million square feet lined up to enter the marketplace in the years to come—such a velocity should not downplay the country’s encouraging growth in commercial real estate.

This supply also comes at a time when India’s real estate market is still feeling the effects of a lull following the financial crisis.

Our expectation is that in the next few months, if that clears off, REITs will come to India for the first time.

“Given the pace of new development, some of this supply could, out of context, appear as reckless. However, in the absence of continued growth of high-caliber office supply, we would be in a worse situation if we did not have that supply on hand, and India would not be positioned effectively for the future,” says Anshuman Magazine, Chairman and Managing Director of CBRE South Asia.

On top of that accelerated growth comes more encouraging news for the real estate sector: a new government that has eased restrictions for foreign direct investment into real estate and construction while also making inroads toward the establishment of India’s first ever Real Estate Investment Trust.

“No one has formed a REIT yet, as there are still some tax issues which need to be clarified,” Magazine says. “Our expectation is that in the next few months, if that clears off, REITs will come to India for the first time,” adding that a REIT will be a “game-changer in the real estate market in India.”

Foreign Direct Investment Has Been “Liberalized”

India had received US$1.2 billion in foreign direct investment as of March 31 this year, a drop from US$1.3 billion the country had received in the same period the year before, according to Reuters. Since taking office in 2014, India’s new government, led by Prime Minister Narendra Modi, has further eased restrictions on foreign direct investment in the hope of reviving its real estate market, where such investment has slowed in recent years.

While FDI into India increased by 30 percent year-over-year in October of last year, real estate represented only 4 percent of the total. Meanwhile, the value of the rupee against the dollar has been stabilizing steadily after the devaluation witnessed during the 2011 to 2013 period.

While FDI into India increased by 30 percent year-over-year in October of last year, real estate represented only 4 percent of the total.

Under the new regulations, the minimum allowable capital investment in the construction sector by foreign investors was reduced to US$5 million from US$10 million. Also, investment is now permitted for projects with at least 20,000 square meters (over 215,000 square feet), a decrease from the previous minimum space requirement of 50,000 square meters.

“After the global financial crisis, [FDI] slowed down significantly, and in the last few years we have seen that India has not been on the map of global investors,” Magazine says. With these new reforms in place, he believes India should see increased interest from global investors.

“We will start to see FDI trickling back into India—but I’m using the word ‘trickling’ because it will take some time,” he adds.

In the meantime, private equity firms, like Xander Group and a consortium of investors led by Dutch pension fund asset manager APG, remain active in the market. Blackstone, which has invested over US$1 billion in commercial real estate in the country since opening its office in Mumbai in 2005, is now among India’s largest landlords, next to local developers DLF and RMZ Corp.

Relaxed foreign investment rules in other areas like insurance, defense and infrastructure may translate into increased demand for office space from businesses in those industries, according to a recent CBRE report.

Developers are adding supply to key urban markets at a time when India’s cities are facing a potential population boom. India’s six largest cities expect to add more than 24 million people over the next 10 years, at which point the country could have 68 cities with over 1 million people—up from 54 today, according to a CBRE report.

Such growth will lead to many commercial real estate opportunities, like new residential housing units and retail. It could also increase future demand for more office space.

“In some of the major urban centers like Delhi National Capital Region (NCR), Mumbai and Bangalore, there is in fact a shortage of large office availability,” Magazine says. 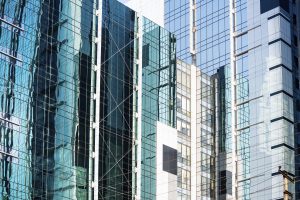 Reduced vacancy levels in established markets like Gurgaon and Bangalore have led some companies to pre-lease space in projects currently under development, according to CBRE. Both Gurgaon and Bangalore have already tallied pre-commitments of more than a million square feet each. Gurgaon, a peripheral region of Delhi NCR, accounted for 68 percent of the transactional activity in the area during the first quarter of 2015, with sectors like IT, financial services and e-commerce driving this activity, according to CBRE.

Major office markets in the country—like Delhi NCR, Mumbai, Hyderabad, Chennai, Pune and Kolkata—should begin to see a diversity of tenants in the coming years, Magazine says. “The good news is there are non-IT companies—like the financial services companies, the pharma sector, the fast-moving consumer goods industry—that are coming in, and they are taking up a lot of non-IT office space.”

Meanwhile, development in the country in the recent quarter remained strong. Over 8 million square feet of new office space was completed in the first quarter of 2015, an increase of 32 percent on a year-over-year basis, with commercial (non-IT) projects making up more than half of that supply.

Recent proposals from the Indian government have helped flesh out a more concrete taxation structure for domestic REITs.

For instance, sponsors that move assets held in the form of units to a REIT will be exempted from a capital gains tax if their holding period is over 36 months. (The tax level would be 15 percent for those with a holding period under 36 months.) Rental income from assets directly owned by the REIT will not be taxed at a business trust level, but a REIT’s dividends at the unit holders’ level will be taxed.

With those developments in place, India is on the cusp of an economic rebound, especially in its real estate market.

There are currently limited opportunities for a foreign investor to directly own a portfolio in India, Magazine says. A REIT structure will open the door to a better investment alternative, he adds.

“Some of these developers who are sitting on their portfolios want to work them into a REIT structure themselves,” he says.

With those developments in place, India is on the cusp of an economic rebound, especially in its real estate market, Magazine adds. That upswing will likely be gradual, not immediate. “With the rupee having largely stabilized, inflation having scaled down, and fiscal and current account deficits ceasing to spell any present peril, the economy is clearly on the mend,” he says.

“The fact is, India is a very large ship to move, and it will take some time,” Magazine says. “But after a sluggish period, India’s real estate market is on the right path toward a recovery.”

Real Estate in Greece: The Country’s One Silver Lining?